Blurb:
It takes one strong alpha with a tight grip to keep a mountain full of shifters under control. Sawyer Ballantine’s contending with an uppity wolf leader and a herd of shifter elk bound and determined to take over. He might be the lone bear on the mountain, but he’s not going to allow another four shifters to just move in, especially not when they whiff of power. They’ll either be his in all ways, or they’ll be gone.

Dillon, Jerry, Kevin, and Brad have no one but each other since their shifter groups kicked them out. The young bear, wolves, and fox make a merry ménage, pooling their meager shifter skills and serving beer. They’ve stumbled into more than they understand, caught in the dispute between the Urso of Ballantine Mountain and the elk. But winter’s setting in, and they don’t know how to keep Dillon safe for hibernation.

And then a bear walks into their bar. 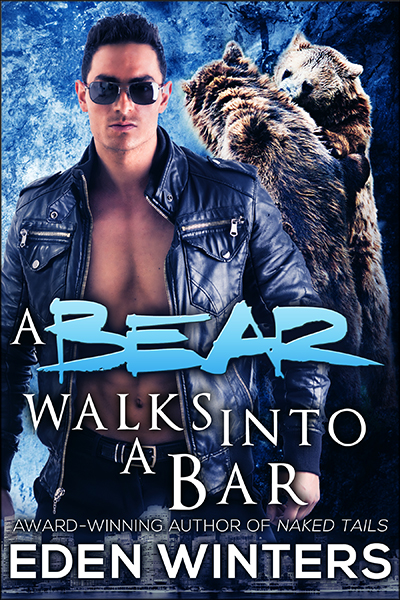 Review:
This erotica story has all the sex you could want plus an interesting plot to go with it. I enjoyed the bits of storytelling going on in the book. But the sex was the focus of this story. There were all kinds of pairings, positions, and types of sex acts going on through throughout the story. It was definitely hot and sensual. I enjoyed the laid back atmosphere between all the shifters and how their inhibitions were considerably lower than most humans. There was a fun cast of characters that had their own wants, needs, and personalities. While there was definite pairing off over the course of the story, they all still played and romped where they were wanted and had fun while including everyone. I liked the plot that you get pieces of threaded into the story. It was fascinating how the shifters all came together, the dynamics between the groups and within the groups, and all of the backstories. I’d gladly read another book set in this world with these characters; whether the purpose of the book is the plot the sex doesn’t much matter to me.
Stars:
Four

Excerpt:
“Where exactly are you going? Would you at least tell me that?”

“A town nobody’s heard of about thirty-five miles from home.” If Sawyer needed to hide, he’d find a similar out of the way spot. Too bad this particular spot sat on the border between elk and predator. Just because they lived off vegetation didn’t mean his rivals weren’t a threat—an expert marksman had joined the herd a few years ago. He’d been tough and stringy, but ceased being a problem.

Conversation grew impossible when Sawyer fired up his bike. Mother Moon, but he loved the rumble of the big Harley between his thighs, the wind on his face, tempting his sensitive nose with a million different scents: moss, pines, rabbit, clover, chicken barbequing on a grill at a campsite downhill, all awaiting him once he reached his mountain.

Fluffy clouds overhead cast shadows over the scenery, and the crisp scent of snow drifted over the highest mountaintops. Colorado. No greater place existed on earth.

Damn, he needed to get laid.

About Eden:
You will know Eden Winters by her distinctive white plumage and exuberant cry of “Hey, y’all!” in a Southern US drawl so thick it renders even the simplest of words unrecognizable. Watch out, she hugs!

Driven by insatiable curiosity, she possibly holds the world’s record for curriculum changes to the point that she’s never quite earned a degree but is a force to be reckoned with at Trivial Pursuit.

She’s trudged down hallways with police detectives, learned to disarm knife-wielding bad guys, and witnessed the correct way to blow doors off buildings. Her e-mail contains various snippets of forensic wisdom, such as “What would a dead body left in a Mexican drug tunnel look like after six months?” In the process of her adventures she has written fourteen m/m romance novels, has won several Rainbow Awards, was a Lambda Awards Finalist, and lives in terror of authorities showing up at her door to question her Internet searches.

Her natural habitats are airports, coffee shops, and on the backs of motorcycles.